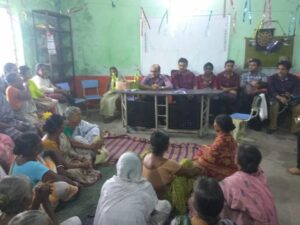 On the 30th of June, 2019, SAMSA in association with the ‘Kolkata Initiatives’ organised a health camp catering to the geriatric population.
Organised as a part of our ‘Sahara’ initiative, the camp was attended by a group of 10 doctors and medical students, who examined around forty elderly women.

Dr. Tanay Maiti (Psychiatrist, AIIMS Bhubaneshwar) examined and evaluated several patients of depression, delusion, and other mental health disturbances, in accordance to the standardized WHO scoring System.
Four patients were identified for surgical consultation and were requested to attend the outpatient clinic at Calcutta National Medical College, where they would be followed up for further treatment. A bunch of other follow-up cases were examined and medications were dispensed, as and when necessary.
The camp ushered in the occasion of Doctors’ Day, celebrated on the 1st of July every year, doing what we do best as health professionals – to heal and care.

‘Project Udaan’ – A Health Camp under the CRY-SAMSA collaboration