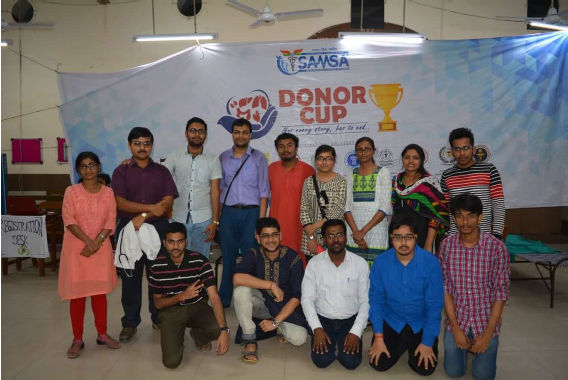 On 15th February,2018, Medical College Kolkata set it’s mark in the field of spreading awareness on Organ donation by organizing a blood donation camp as well as performing a street play on the college premises.

The event was attended by 114 students out of which 16 SAMSA members, 97 non-SAMSA members and 1 non-medical professional (who came from Dhanbad on some other work and donated blood after getting to know about th event on social media). The event was directed at medical students and common people as well.

Our main objective was to sow the seeds of the concept of organ donation in the minds of the medical students and general public and to remove myths and misconceptions surrounding organ donation and spread information about it in the simplest way possible.We also aimed at bringing out the desired effect of the messages through adequate amount of creativity in our posters and street play.

The response to the Blood donation camp was quite impressive. We had a total of 31 blood donors. The biggest surprise for us is that our invite travelled all the way to Dhanbad. Every donor was given complementary food packet and received a certificate from the Blood Bank.

The response for the Organ Donation motivational campaign was good as well. We expected around 150 students. Most of the student were from 1st year. It’s good that we have been able to plant the thought of organ donation from the very early stage itself. There were students from other years as well. It was a one-to-one session conducted by a SAMSA member who attended the Transplant Coordinator training workshop at IPGMER, Kolkata organized by ROTTO (West Bengal).

The Street Play was another impressive performance which was scripted and enacted by the students themselves. The element of surprise added more curiosity and enabled us spread to the message in a more convincing way.

And last but not the least, a big thanks to RJ Animesh from 91.9 Friend’s FM who helped to spread MCK’s message to the radio user base.

A step towards a brighter future

‘Project Udaan’ – A Health Camp under the CRY-SAMSA collaboration