We at SAMSA believe that in order to truly help others, it is essential that we ourselves are not only knowledgeable but also are able to correlate all the textual knowledge in our clinical practices.

Under the expert guidance of a panel of faculty members, we have high hopes for this program to give rise to skilled doctors in the days to come.

Case of the Week 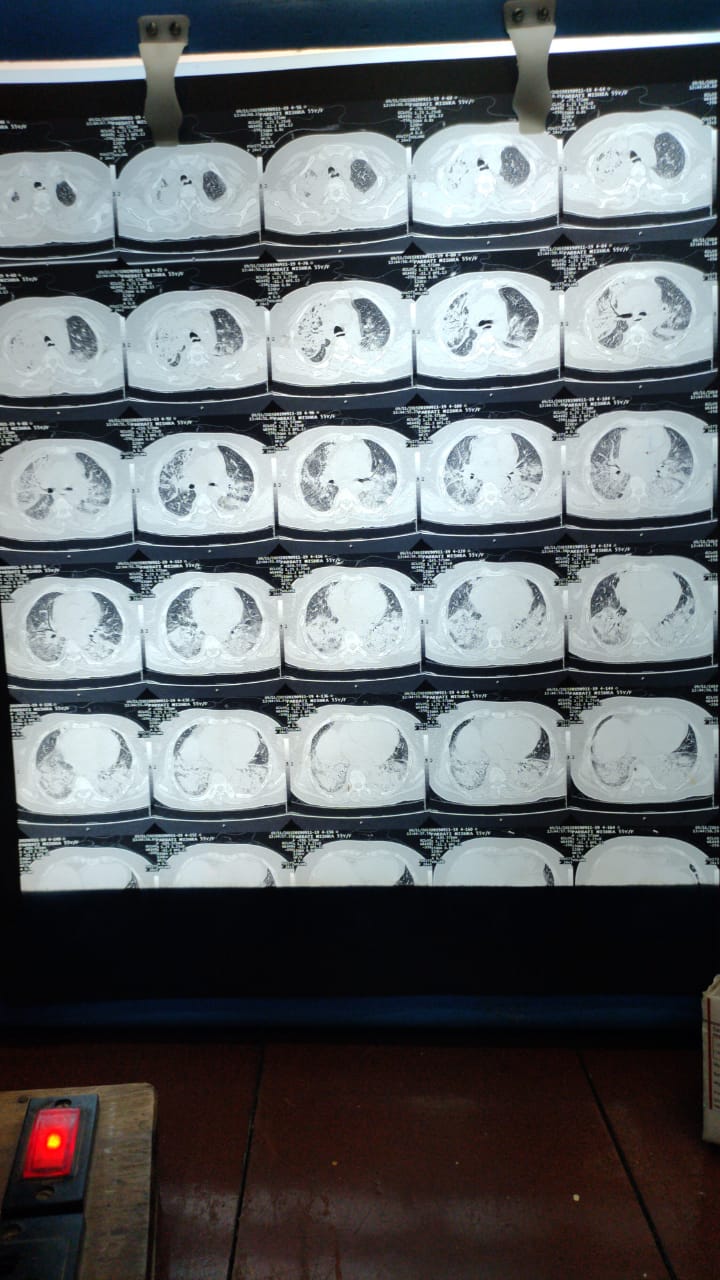 A 62 year old female presented with weakness of all 4 limbs and unable to speak coherently or swallow. 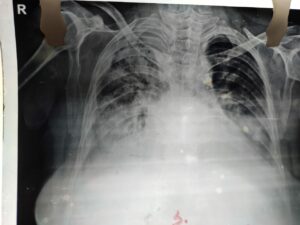 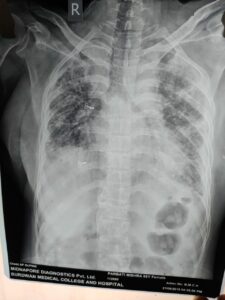 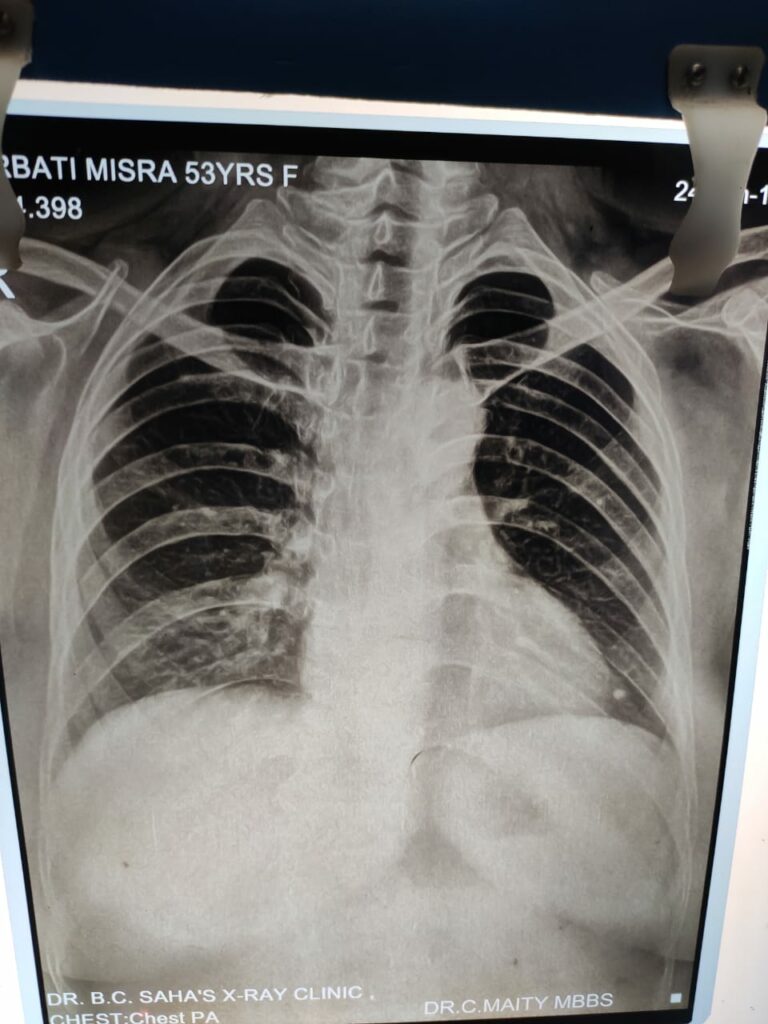 The patient's relatives gives a history of fever with cough with scanty mucoid expectoration with shortness of breath for past 1 month.

Patient has a history of ingestion of nitrofurantion.

ECG, USG Whole abdomen and other routine investigations are normal.

HRCT thorax was done and has been provided.

MRI Brain was done which revealed ischemia in occipital lobe and lacunar infarcts.

The patient did not show any response to injectable antibiotics or antiplatelet medication given for CVA and on serial chest radiographs the lesions are persistent.

1) What may is the probable diagnosis.

2) What may be the etiology?

Cryptogenic organizing pneumonia (COP) is a form of idiopathic interstitial pneumonia characterized by lung inflammation and scarring that obstructs the small airways and air sacs of the lungs (alveoli). As the name suggests it is idiopathic but some underlying causes are identified to be associated with this type of organizing pneumonia: infection (bacteria, viruses, parasites, or fungi); drugs; or a reaction to radiation therapy for breast cancer. Organizing pneumonia can also be associated with specific disorders such as certain connective tissue disorders like RA-COP or SLE associated COP, Leukaemic malignancies (cancers), or ulcerative colitis, infection (bacteria: Chlamydia, Legionella, coxiella, staphylococcus, viruses: HIV, Herpes, parasites: Plasmodium, or fungi: Pneumocystis, Cryptococcus); drugs like anti cancer drugs, nitrofurantoin, 5-ASA, Gold, Carbamazepine, Phenytoin; or a reaction to radiation therapy for breast cancer, Sjogrens syndrome, myelodysplasia, Sweets syndrome, Common Variable Immunodeficiency.

3) What is the best line of management for this patient?

Since it is a chronic inflammatory condition the cornerstone of treatment for COP is corticosteroid therapy. The swift response to therapy within the first few days to weeks is well described. Doses of 0.75-1.0 mg/kg/day should be initiated once the diagnosis is established, preferentially after biopsy tissue is obtained. Relapses commonly occur with tapering and are reported in 13-58% of cases. While some experts recommend prolonged courses of therapy (up to one year), more recent consensus is to recommend a shorter duration of therapy (five to six months) with rapid taper after the first month of treatment. Since relapse does not increase mortality, clinicians may elect to accept the risk of relapse in favor of a shorter treatment course and decreasing the risk of steroid-related complications that exist for most patients. In a small subset of asymptomatic
patients and in patients with minimal disease, infiltrates may regress without treatment, and observation alone may be appropriate. In the case of critically ill patients, IV pulse-dose methylprednisolone (500-1000 mg per day) for three to five days may be indicated. Macrolide therapy has been proposed as a therapeutic option because of its immunomodulatory effects, though data for this are at the level of case series. A three-to-six-month course of macrolide therapy may be attempted for patients with mild disease and for those who are unable to tolerate steroids. Because of the corticosteroid responsiveness of COP, the role of other immunosuppressive or cytotoxic agents has generally been less well described, but these may be considered in patients with COP refractory to corticosteroid therapy or in those who are troubled by severe side effects. Azathioprine, mycophenolate mofetil, rituximab and cyclophosphamide have been used successfully to treat COP

Like other ILDs, COP develops as a response to alveolar epithelial injury. Inflammatory exudates organize into intra-alveolar fibrosis. In contrast to other idiopathic interstitial pneumonias, the fibrotic process in COP is strikingly reversible. This may be a consequence of the prominent vascularization mediated by growth factors like vascular endothelial growth factor and basic fibroblast growth factor. Experimental animal models provide further insight into the pathogenesis of COP. Inhalational exposure to paraquat in monkeys or cadmium in rats creates gaps in the epithelial basement membrane that lead to intra-alveolar migration of interstitial cells, damage to type I pneumocytes, and the initiation of abnormal alveolar repair. Viral inoculations of animal models implicate T-cells in the pathogenesis of COP. Wound-healing mechanisms like re-epithelialization and increased apoptotic activity in newly formed connective tissue may be found in OP specimens and may lead to appropriate matrix remodeling. Radiation therapy in breast cancer patients may lead to the release of autoantigens,
causing an autoimmune reaction. Increased lymphocytes, neutrophils, and eosinophils with an increased CD4/CD8 ratio have been observed. Sarcoidosis is excluded by serum ACE being normal, and nitrofurantoin induced hypersensitivity pneumonitis is excluded by the fact that it will improve on stoppage of drug and not have such a long course Regarding cva and cop correlation, the inflammatory mediators coupled with chronic hypoxia due to ild promote thrombosis and ischaemia BAL fluid Lymphocytosis and granuloma all point to chronic inflammation wherein other causes are ruled out thereby favoring diagnosis of exclusion. Furthermore the history of sudden onset ILD with typical HRCT features of consolidation with air bronchogram and organizing pneumonia suggesting alveolar insult points towards COP/BOOP. The patient is now doing very well after receiving methyl prednisolone IV bolus and now on oral prednisolone maintenance with good resolution of pneumonia

Send us your explanation